Welcome to Part Three of Five on my Yeosu weekend getaway with you know who! Part Two featured Tourist Sites & Attractions, while Part One was an overview to the City of Yeosu.

Today I want to get to what is, arguably, Yeosu’s strongest point. FOOD. The entire Jeollado Region of Korea is known for having THE best and often cheapest food in the entire country.

Agujim is a braised fish dish served all over Korea. Yeosu is famous for it. Technically, the fish is “braised angler,” but 90% of foreigners wouldn’t know what the hell kind of fish that is (and it’s kind of ugly). So I’ll describe it. Chunky, flaky white fish. No annoying as fuck tiny bones. Clean taste. Good texture.

This dish was our first stop on the list. We went to “You Know Who’s” favorite place when he was a kid. Many of his friends said it had become super popular over the years and changed, but You Know Who still loved it!

The restaurant name is 조롱박 which does not translate to English easily…..literally Jo Long (or Rong) Bak . Google Maps has an even worse English name for it, Jolongbag. It’s true meaning is a dried out gourd used to drink rice wine. Presumably, this gourd is used to hold the rice wine vinegar, seasoning, food, ANYTHING 🙂

We also ordered another dish, seodaehoe. This is another example of Korean not translating well to English haha. Seodae is a type of sole, and hoe (pronounced “hway”) means raw. Served like sashimi. The pieces are very firm, nice and chilled, similar to tuna sashimi, tossed in a spicy, sour, rice wine vinegar and red pepper sauce. Also mixed in are cabbage and some various onions. VERY tart and refreshing.

Total cost for our meal: 40,000W. Now, you don’t have to eat this much. In fact, you can order just either of the dishes. One is more than enough. But we were being glutttonous and HANGRY!

That afternoon, we did A LOT of sightseeing. So, our next meal was for dinner at the Yeosu Fish Market. Again, these terms are searched in Korean, so they might not display in English on your phone or computer.

At the fish market, you choose any stall. Honestly, they’re all the same in price and quality. The worker will chop up your fish at her stall and plate the sashimi.  While she’s doing that, you will go to the “restaurants” next door. Choose any one that has a seat.  There, you will pay a small table charge of around 2-4,000W per person.

The restaurant staff will serve you beer, soju (of course, for extra) and free side dishes. After you eat all of the raw fish, they use the fish bones (from your fish) and make a spicy stew out of it. So all in all you get a giant meal out of this fish.

After the fish market, we tried to go to Romantic Pocha Street, but they shut down oddly early. So we just visited a random hof near our motel. Nothing special to write about really. Some fried shrimp for 20,000W.

The next day, we woke up and headed back downtown. As You Know Who grew up in Yeosu, we had a nice chat with the taxi driver about the changes in Yeosu and everything. So, logically, we asked him to recommend a lunch place. And we ended up at Daeseong Sikdang.

After our lunch, we headed over to the rail bike by taxi, did that quickly, then taxied back to Odong Island.  The good news about, really, every tourist place, is that, of course they have snacks and people hustling everywhere. Some of it is tourist crap, yes, but some of it is really good…. like this random street stall.

The lady was selling warm breads/pastry snacks from her tent. The crowd of old people meant the product was on rotation and was fresh.

After exploring Odong Island, it was time for the MAIN EVENT…..soy sauce crabs!!!!!!!!!!!!! Soy sauce crabs are a Yeosu specialty. A) Because they’re delicious and B) they’re CHEAP.

What are soy sauce crabs? You know Wikipedia has the answers!!

“Gejang or gejeot is a variety of jeotgal, salted fermented seafood in Korean cuisine, which is made by marinating fresh raw crabs either in ganjang (soy sauce) or in a sauce based on chili pepper powder. The term consists of the two words; ge, meaning “a crab”, and jang which means “condiment” in Korean.[1] Although gejang originally referred only to crabs marinated in soy sauce, it has begun to be called “ganjang gejang” these days to differentiate it from yangnyeom-gejang (양념게장). The latter is relatively a new dish that emerged since the restaurant business began to thrive in South Korea.[2] “Yangnyeom” literally means “seasoning” or “seasoned” in Korean but refers to the spicy sauce made with chili pepper powder.”

Soy sauce crabs are the main event, but there are also a spicy version in gochujang, seasonings, etc. (which secretly I liked better at  the first place):

You Know Who’s Friend recommended we try a place called Cheongjeong Gejangchon. They are famous for their 갈치조림 (Braised Cutlassfish, pronounced Galchi Jolim). They also serve the crabs as part of your sides and you can get one refill of each. 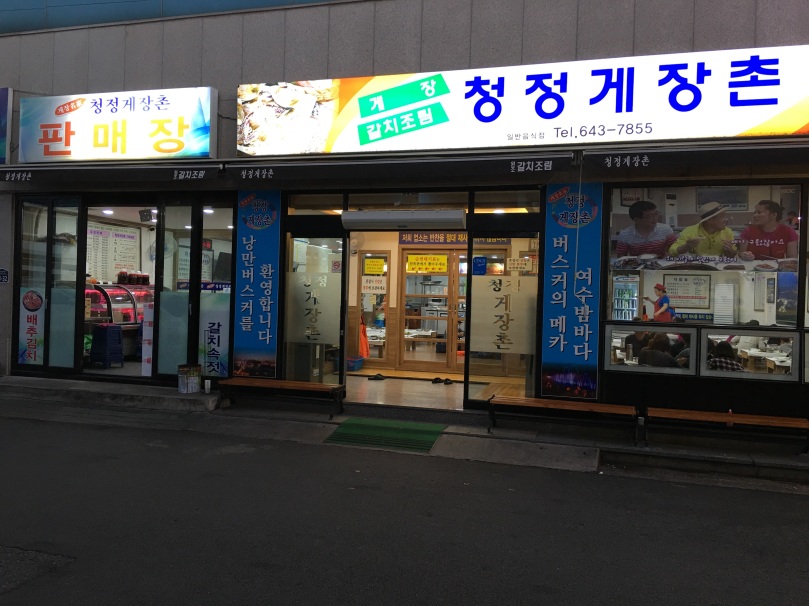 We  STUFFED our fat faces that day, whew! Then we headed over to the other MOST POPULAR CRAB PLACE, 황소식당  (Hwangso Sikdang).

We just ordered a jar of soy sauce crabs to our house in Seoul. Very cheap, 30,000W for 2.5 kg. We ate them for almost a whole month, but they became TOOOOOOOO salty so we had to throw a few crabs away. This month we’re gonna get the spicy seasoning (yangnyeom) ones.

After making our purchase, we hopped in a taxi back to Romantic Pocha Street for the last two hours before our train. We literally squeezed every second of time full of activities. It was PERFECT.

Romantic Pocha Street has TONS of different dishes, with some more famous and even people wait in line for them! 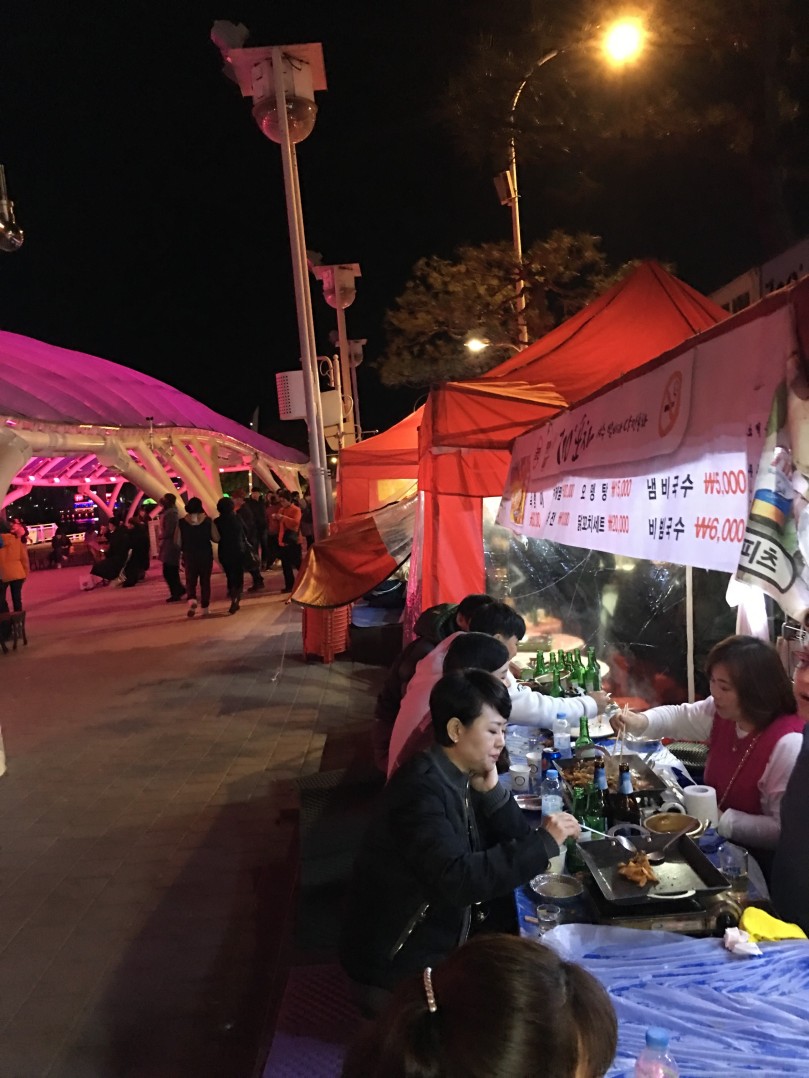 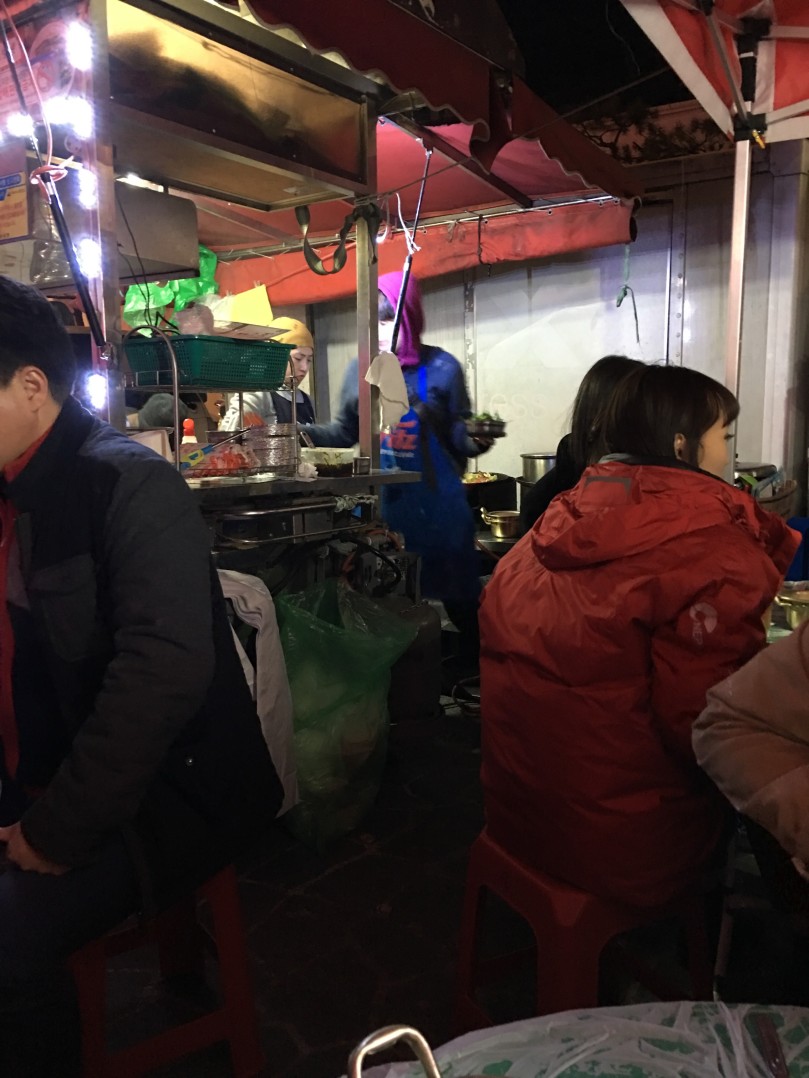 We picked one that was full and had like one table left. Random. Luck of the draw.  At this point in the trip, we were tired of seafood hahaha. It was all delicious, but we wanted some MEAT!

So we ordered a rather interesting dish…..that still had seafood! Sea snails are common here (whelk if you will). They’re very meaty, not so much fishy. Also tossed in were some pig’s feet which have AMAZING seasoning.

We got a little drunk, then You Know Who raided a bubble tea cafe and bakery for the train ride home.

9 PM and we were at the train station and took the Midnight train back to Seoul!

This is where I’d usually write something cute and witty, but whew, so busy that this post took TOO LONG! Stayed tuned for the last installments…sooooooooooooooooooonnnnnnnnnn……….

Back to top
The Kimchi Queen

Eating my way around the world